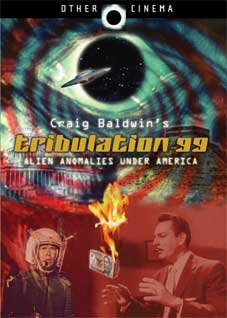 Why are film festivals cool? Because sometimes you get to travel in time. At FLEX 2007 (Florida Experimental) the fest director Roger Beebe brought down Craig Baldwin as a juror and screen his first feature TRIBULATION 99 (1991). Beebe introduced Baldwin and revealed a fact about many of us age 30-40 folks – TRIB 99 got us into experimental film. For Beebe, he got inspired by Baldwin and started making work. For me, it was a new type of film viewing experience all together.

Connecting the dots of underground cult horror, terrifying conspiracy theories, maniacal documentary and avant sensibilities, TRIB 99 is an important a document of the second half of the 20th century as you will ever need. Cramming almost every oddball conspiracy theory – and underground government fact – together through found footage, 50s style shock narration and superhuman editing, TRIB 99 holds up today as it did when I first saw it 15 years ago. At the time, I thought I had seen cult films, but TRIB 99 struck new ground for me. At turns hilarious and terrifying, 15 years later I laughed just as hard and got totally freaked out by this fucking world. Baldwin has cultivated Bruce Conner, B movies and secret reports into a career of culture jamming. We are all the better for it.

So you have the DVD instead of the theater experience I’m talking about. But still a great deal with Baldwin’s commentary and two early, rare shorts by him, ROCKETKITKONGOKIT (1986) and WILD GUNMAN (1978). See where it all came from.