TV Sheriff and the Trailbuddies. 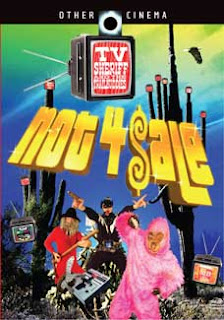 The Westworld robot, a video ape and Don Knotts started a pirate TV station. Not a metaphor, this is science fact. They have the finest video switching equipment but only cable TV footage and disco technique. All hail TV Sheriff and the Trailbuddies, a 'video band' who mine old VHS tapes and make golden nuggets.

More realistically, the Sheriff is a guy in LA who takes tons of found footage, from commercials to rare TV to Arnold to music videos and mashes them together to make new crunchy vids. His live shows at Star Shoes in Hollywood made him an underground legend, and this DVD collection of 30 videos is pretty killer.

TV Sheriff’s style is reminiscent of Animal Charm’s transgressive feel with more recognizable sources, and with the speed and techno vibe of EBN (Emergency Broadcast Network – remember them??) and even some of their politics. If Vice magazine’s TV Carnage wasn’t laid up in the hospital, but religiously healed by E, you would get TV Sheriff. Is there a name for this genre yet? Can I make one? Channel Knobs. No that sucks. Knob Surfers? Toaster Heads?

Because, there used to be this primitive home video switcher thing called Video Toaster and…screw it. See – its hard to mash ideas together. But the Sheriff pulls it together in a funny way, always entertaining but also with some social and political observations in there. YES, it is easy to say TV is twisted and sick and the evil tool of rich people. But it’s hard to show that and not be condescending. All hail TV Sheriff and the Trailbuddies.

Slick DVD production is great, easy to navigate and tons of extras, include “collaborations” with Coldcut, DJ Q-Bert and VJ V2, and an introductory essay by Gerry Casale (from Devo), which is like a blessing down from the heavens.