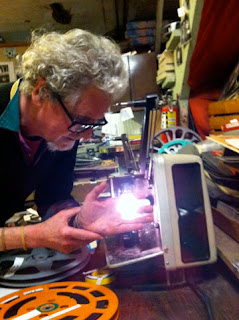 All at once a filmmaker, archivist, culture jammer, exhibitor, teacher and underground film historian, Craig Baldwin is one of the pillars of the experimental film world. As a filmmaker, his landmark TRIBULATION 99 (1991) is a calculated frenzy of reworked found footage layered with every conspiracy theory ever made forming a pitch-perfect statement of our times. He hasn’t slowed down since, making four more features, a DVD label and running Other Cinema in San Francisco's Mission District. A screening room with an eclectic lineup programmed by Baldwin of beautiful art films and important political works, OC finds the fringes of film and embraces them. We talk about filmmaking and how to get unusual cinema to the masses.


all podcasts are available here for streaming or download, and on iTunes for free under Cinemad.

Bookends:
Theme from “The Mysterians” by Akira Ifukube
“Xicotepecker” by Puzzle Punks