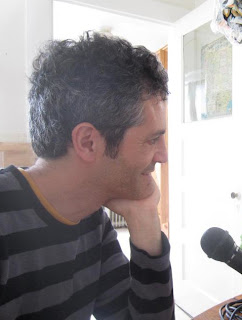 Recorded in April, we catch up with Sam Green right after his first performance of THE LOVE SONG OF R. BUCKMINSTER FULLER at the San Francisco Int'l Film Festival. Now (August 2012) Green is about to go on tour with Yo La Tengo to perform the show in other cities. LOVE SONG is an exciting new type of cinema, with the writer/director Green live on stage speaking in front of onscreen stills and videos, as Yo La Tengo is next to him, performing the film's soundtrack.  A follow-up, at least in style, to Green's UTOPIA IN FOUR MOVEMENTS from 2010 - we talk about this new pursuit of form for Green as well as his recent short film about Esperanto, THE UNIVERSAL LANGUAGE. For a background on Sam and his films, like THE RAINBOW MAN/JOHN 3:16 and THE WEATHER UNDERGROUND, check out our earlier interview from summer 2010 here.

photo of Sam by Vanessa Renwick

all podcasts are available here for streaming or download, and on iTunes for free under Cinemad in podcasts. I haven't figured out how to get it on Instacast yet, advice appreciated.