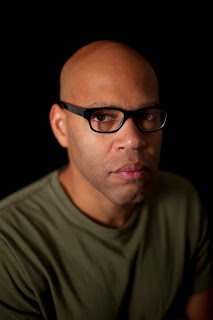 Kevin Everson makes a film a day. Not really, but his intense work ethic has resulted in tons of shorts and six feature films. Working in his own way with 16mm, video and long takes, he films African-American culture through daily family life. Creating a portraiture of people and their surroundings, Everson concentrates on the formal design of image and sound. But he also adds in sports, love and gambling - he's got insight to people. Instead of focusing on giant events and melodrama, he looks at what makes the seconds and minutes of our lives go by, with a subtle humanist touch and with some humor. When you watch his films you might get stuck on what's on the surface. To hear him speak shows you the other layers you don't want to miss. His new feature is THE ISLAND OF ST. MATTHEWS and will show at the Los Angeles Film Festival this June, 2013.

more info and to book his films:
www.picturepalacepictures.com

I forgot to do music bookends. Kevin suggests EPMD's So Wat Cha Sayin'.

photo by Pamela Pecchio
all podcasts are available here for streaming or download,
and on the iTunes for free under Cinemad in podcasts.