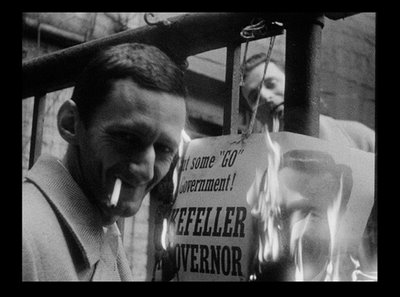 THE (REPUBLICAN) ELEPHANT IN THE ROOM.

Aza Jacobs sent me a copy of his father’s film STAR SPANGLED TO DEATH (1957-59, completed 2003-4) for me to review and it’s been staring me down ever since. Half because of day jobs taking time – half because this film is an epic in every way imaginable. Avant-garde, historical, political, allegorical, maniacal: six hours and forty-five minutes of obscure found educational and nature films mixed with 1950s street theater footage shot by the filmmaker and updated with anti-Bush thoughts and opinions from the past five years. That’s right, 50 years in the making.

Ken Jacobs is the man who created this monsterfilm.

The film is avant-garde: styles of editing and photography are mixed and matched, found footage sometimes plays out completely and other times it cuts back and forth with footage shot for the film. Soundtracks come and go between famous songs, narration, religious radio and political speeches. Long sequences of these sounds are over a black screen.

The street theater ranges from dicking around with garbage to amazing chiaroscuro portraits of people, buildings, movements and shadows. The main characters are The Spirit Not Of Life But Of Living (played by underground legend Jack Smith), who is random and wild, and Suffering (the ultimate lovable underdog Jerry Sims), who needs love and understanding in this world. Their street ‘performances’ are layered with various sounds from the found footage, African hunts from the first half of the last century, exotic dancers, and sickening rah-rah America speeches from Nixon and Reagan. Jacobs connects the fairy tales of Frankenstein and the Ugly Duckling with reality.

Text by Jacobs comes and goes, providing social and political commentary (“Forget ‘far-right idealogues’, they’re crooks,” or “Religions are bedtime stories gone amok…”), and occasionally goes by so fast its put into the subliminal realm – but on DVD you can pause and scan and read. This changes the viewing experience from the theater, as you are dissecting it in your own home at your own speed, enforcing the essay nature of the film. Which is: our country was based on brutality and is still sick.

Spangled is a healthy lesson in our country’s sordid history. There is various archival footage of blackface singers and racist cartoons. Reagan speaks of the best country in the world and on-screen text has Christ telling his followers to intermarry with his aggressors in order to overtake them. Jacobs grew up with McCarthyism and sees it in full force today. His comments and film parallels are almost always as humorous as they are shocking, fairy tale as vital opinion, a la Dr. Strangelove.

And while the text tells you what he thinks, Jacob doesn't confine the viewing experience to a traditional documentary way. Spangled doesn't use archival clips edited to make a point, rather entire short films within the film, such as the safari documentary and the entire Nixon “checkers” speech. The Smith and Sims characters sometimes seem totally insane, other times you see people hanging out, walking around and thinking in long takes. Themes repeat but this is not a one-note exercise. Every viewing is different for each audience member.

While this epic is frenzied, you can see the method and enjoy it. Ken Jacobs is known as a powerhouse in the avant film world with his various movies and lightshows, as well as his huge personality that rubs people in different ways – one festival programmer dubbed him the John McEnroe of the avant-garde. But it is this kind of ferocious nature we need from art. People need to be pissed off when they make films sometimes.