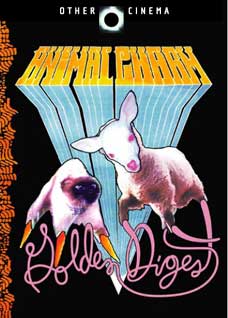 The Charm is two men: Rich Bott and Jim Fetterly. They find videos, usually the educational and instructional kind, occasionally the public access kind, often the incredible homemade music video kind, and reedit the footage into a new, organic short film…. er, video. What’s interesting about that? No matter how much the mash-up, you can still sense what the original video’s intention, what it’s sellin’. But the original is so ridiculous that it doesn’t deserve to exist anymore. The Charm’s remix, with jumps, loops and new soundtrack either tells you what the video really meant or is simply screaming back at the original, “You suck.” What’s interesting about that? It’s fucking hilarious.

You know what else? Their shorts are really smart. Not just jamming crap together, but ripping apart notions of selling, deconstructing videos made by companies for strictly its own employees, or championing home-grown entertainment. The forced-joy of owning a backyard full of sports opportunities (“Family Court”) is looped until we realize that suburbia may be the last vestige of Rome. A simple industrial about a company boss (“Mark Roth”) is completely re-understood with a thriller movie soundtrack. One of my favorites is the redux of Bill Murray’s Meatballs where all the shots of Murray and lead kid Chris Makepeace are taken out, as the remaining shots are treated with lovingly nostalgia (“Marbles”, the name of the dead frog in the film). It’s Thom Anderson’s Meatballs Plays Itself for you art fans.

And much, much more. The collection seems pretty comprehensive, from their classic “Stuffing” to Rich’s poignant vocals on “Moving Day.” The extras are great: the Charm’s previously unseen first video - “Sunshine Kitty,” a live video mix from a gig at the Aurora Picture Show (featuring “Wow”), and a video scrapbook of VCRs.

Just buy it and play it at work, dork.