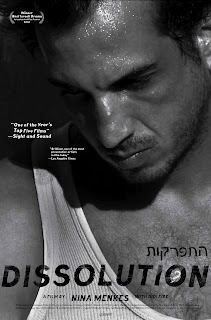 If you've read anything in Cinemad and liked it, you will like the work of Nina Menkes. Her work is one of the reasons I started the zine, actually. In 1997, some friends left Tucson for CalArts. A steady supply of amazing VHS tapes came my way. I finally got to see great avant films by filmmakers I had only heard about (remember pre-internet) and I got introduced to so many new names that had been working strong for years but stuck to screenings in the larger cities or in rural strongholds like Portland or film festivals that had room for pure art cinema. Frustrated at the lack of information out there, and inspired by other homemade zines like Giant Robot and Dishwasher, I started Cinemad to have a reason to search out films and filmmakers and share the knowledge. I figured it would help me find more films and filmmakers by default. Menkes was the first person I interviewed and Tinka Menkes in THE BLOODY CHILD was the first cover, published in fall 1998.

Its over a decade later and Cinemad finds itself an online zine now, spastically updated. And there is a new frustration: getting films into theaters. Its always been difficult for avant, cult, underground, experimental.... undefinable films to make their ways into movie theaters, which operate within the traditional business sense of mainstream movies. Its hard to break away from those "box office success" notions, because the equipment is expensive. Screens, projectors, lenses, bulbs, electricity, air conditioning, speakers, amps, wires, it all adds up in cost and its all made by big companies who are not making it to be creative artists. Even if you have a floor staff that are volunteers, you can't just have a theater with no money coming in. Yes, there are many exceptions, incredible homemade places, great non-profits with loyal audiences, microcinemas that install faith in you. And yes digital projection is changing everything, giving us even more hope. But video bulbs are not cheap either.

And so, Cinemad is starting to help those interesting, unusual venues that like the Cinemad type of film find the films and filmmakers and vice versa. Cinemad Presents is booking films into theaters across North America and slowly into other countries. Sometimes its a traditional weeklong run on the big screen, sometimes its a single special screening down the road you have to get to or you'll miss. We are not trying to write a manifesto here. Just sharing knowledge.

Some of the first films we are distributing are by the first filmmaker we wrote about: Nina Menkes. The mystical, intense worlds she created will be travelling in a retrospective to select theaters. Her new feature, DISSOLUTION, and her recent film, PHANTOM LOVE, will be part of that and showing in more cities.

But only with your help. If you want to see her films and others like them, you can lend support to her Kickstarter page, getting the films out to theaters. A little goes a long way.

and Nina wanted to note words of inspiration from John Cassavetes, the Godfather of doing-it-yourself cinema:

"If you need distribution in place before you have the courage to make a movie then it’s not a movie worth making. There are many other ways to make money than making movies. If you need to make money, please find some other way to do it. You make movies to lose your money. That is the purpose of making a movie to put your life into something not get something out of it."


Of course, if you pay to see a film you enjoy, nobody is losing, right?


Our distribution company is right here: www.cinemadpresents.com Hope you like all the stuff.