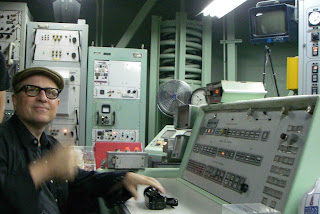 
You may know Bobcat from his long standup comedy career, his many acting roles from the 1980s and 90s, or that time he set a couch on fire. But Cinemad is more interested in the films he has written and/or directed over the past decade. Mixing a real underground, independent film vibe with some extreme plotlines, he provides a cutting insight to human nature that is hilarious but not all that absurd.

photo by Mike Plante: Bobcat in the Cinemad media wing.