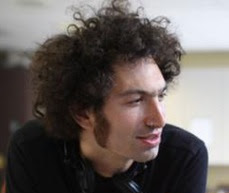 also on iTunes for free - just search for Cinemad


Cinemad podcast #2: Azazel Jacobs' award-winning film MOMMA'S MAN premiered at the Sundance Film Festival in 2008, and quickly became one of the most lauded films of the year, winding up on many "best of" lists. Released in numerous international territories, it was distributed domestically by Kino International. Jacobs' short film KIRK AND KERRY was named Best Dramatic Short at the 1997 Slamdance Film Festival and became part of the Permanent Collection of the New York Public Library.

He later teamed up with fellow filmmaker Gerardo Naranjo to make the micro-budget feature THE GOODTIMESKID, which found a small but loyal following, and was released by Benten Films. In 2009, he received a commission from the Museum of Modern Art in New York to create the short film I SEE.

The son of avant-garde filmmaker Ken Jacobs, Jacobs was born in 1972 and raised in lower Manhattan surrounded by important and innovative artists. He went to undergraduate school at the film department of SUNY Purchase and received his Masters from the American Film Institute in 2002.

bookends:
"Attitude" by Bad Brains
"Gates of Steel" by Devo
we got that P.M.A.