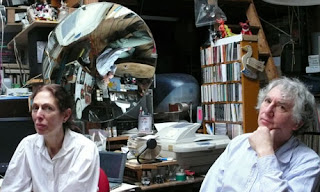 What to say about Ken Jacobs? An avant-garde film legendfrom his early epic film STARSPANGLED TO DEATH to his many Nervous Magic Lantern live performances. Even at just 40minutes, his new film SEEKING THE MONKEY KING is another epic, combining his strongpolitical statements with his incredible use of abstract 3D imagery, showinghow a new technology (and tired fad) can be used to create great art in theright hands. Ken’s son, filmmaker Aza Jacobs, sits in and interviews him,covering his past and present work now spanning 50-plus years, his time withHans Hofmann, Stan Brakhage and Nicolas Ray, and how Ken met Flo.

bookends:
“Without Ryhthm” by Cab Calloway (composed by YellenDougherty)
“Hypnotist in Hawaii” by The Raymond Scott Quartet

All podcasts are available fordownload with that down arrow button on the right hand side. Headphones arebest – get personal with it.