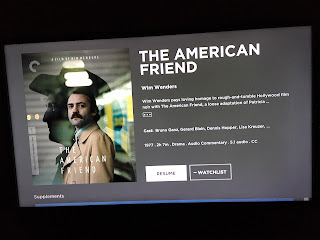 As FilmStruck is shutting down tonite - probably due to a multi-corporation merger - I sat down to watch something before it closes at midnight.

What film made sense? So many big names on the site, but also so many lost classics and under-appreciated filmmakers. Almost went with a Zatoichi film, which is all of those things: famous yet underseen and mythic in how many they made and how consistently good they all are.

But had to go with THE AMERICAN FRIEND, directed by Wim Wenders and starring Dennis Hopper. And in classic Criterion format, listen to the audio commentary with it. I've seen it a few times, but every time you notice more stuff and I never heard the commentary.

Wenders is on it, explaining the things you really want to hear - how the film came to be, what it was like making it, what the people onscreen in front of you were like, why are all the bad guys played by real film directors, how he wanted Hamberg to look like New York to look like Paris, what he hoped the film would be and what made him happy or sad about it.

Wenders keeps saying "when Dennis" did this, and "Dennis told me" and so on - except Dennis is right there. Then Dennis would laugh and start talking back and forth to Wenders, who keeps doing it like he's talking to a ghost and they both realize it.

This is a loaded pick - thanks to working at CineVegas I got to know Dennis Hopper a bit. He worked with us as a figurehead, helping to bring in interesting actors and directors to get awards. From 2003-2009 he came to every fest, every day, hung out and saw a lot of newer films too. He just loved movies and people who make movies and talked about them like film lovers do. He wanted you to see his films and he hoped you liked them. But he would watch your movie, too.

So because of my small world connection to Dennis, this commentary was all the more haunting and beautiful. I wish I could still talk to him about movies, about coming up with ideas on the spot, about how bad of a time it was for him back then, as he would wake up literally with a lampshade on his head. He can laugh about it now. How he could even remember the 70s doesn't make sense.

Anyway Filmstruck was fantastic for a couple of years and I have very little faith in the world of movies on the internet as data and money are considered more important than art and emotion and more important that just plain fun, it's ridiculous. Its starting to make many important films hard to see. (I miss video stores.) Criterion does have plans to start another site with their movies and hoping it works out and inspires other companies to celebrate movies without needing to take over the world. 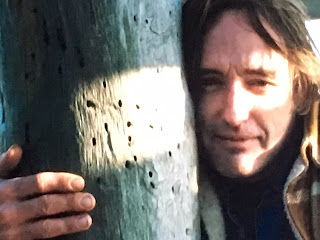 Side note: I recently helped some friends release Dennis's second film as director, and one he really loved, called THE LAST MOVIE. Check it out:
http://arbelosfilms.com/distribution/films/the-last-movie/